Think increasing your productivity will increase your impact at work? It doesn't work that way. Here's why productivity is uncoupled from impact and what you can do to make more of it.

Think increasing your productivity will increase your impact at work? It doesn't work that way. Here's why productivity is uncoupled from impact and what you can do to make more of it.

Why do we still have to work?

And then we invented robots and now our stuff could produce other stuff.

The whole idea of all this technology was to amplify our limited human bodies and our limited human minds to the point that we should be working less and not more, and so again I ask: Why do we still have to work?

More or less 100 years (depending on industry and geography) after the 40 hour work week was standardized, we’re still working 40 hours a week. More in most cases. And the results of that are a tremendous increase in productivity. Global GDP went from $4.74 trillion in 1913 (less than Apple, Amazon, Alphabet, and Alibaba’s combined market cap (alliteration for dramatic effect)) to over $108 trillion by 2015. Here’s an artist’s rendering of a graph of that global GDP growth. 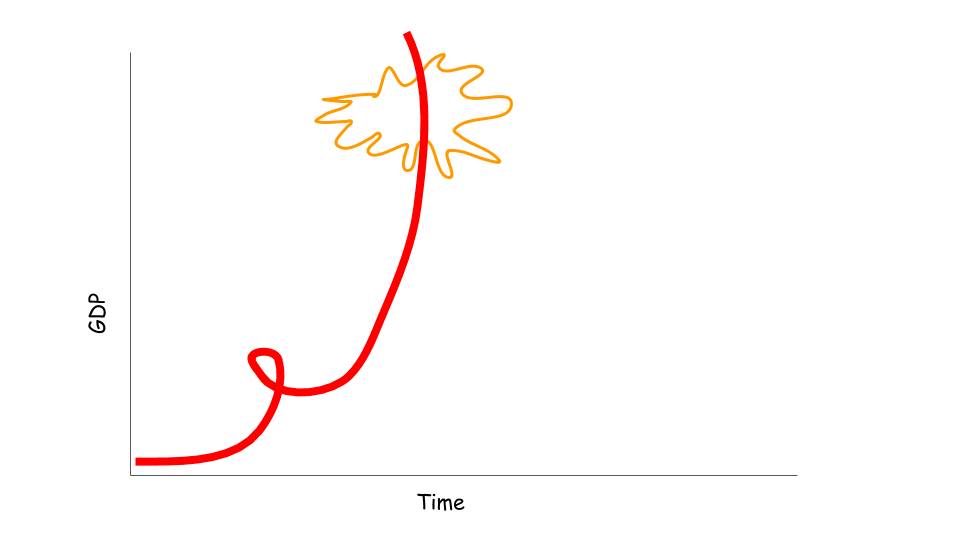 How much does our species need to produce before we have enough? How much more productive can we possibly be?

The answer, it turns out, is much more productive.

In a survey from Wrike, almost half of employees feel productive less than 75% of the time. And in the same survey, they found that employees feel like they waste more than 21 hours a week sifting through emails, looking for documents, hunting down information, or other busy work.

That’s more than half of that vaunted 40 hour work week.

Imagine how much more productive we could be if we didn’t waste so much time!… is not what this blog is about.

What would happen if we could eliminate all those hours of busy work? After centuries of obsession with productivity, does anyone actually think we would just take the rest of the day off? Or would we keep working 47 hours a week or more chasing 100% productivity? 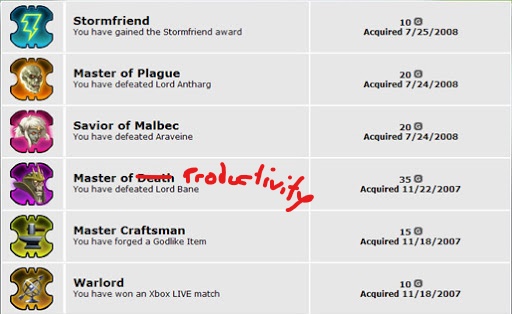 Productivity isn’t an X-Box achievement. We should stop trying to be productive.

3 Reasons productivity is a bad objective

Here are three reasons why wasting time rules and why you should try it… is also not what this blog is about. Sorry. From the bottom of my procrastinating heart I wish I could give that blog to you. But wasting time is a lot like obsessing over productivity: it gets between you and what you actually want.

1. Productivity has no goal

Productivity is a bit of a trap. It’s like if Sisyphus could somehow find a way to roll his boulder up the hill 30% faster. If the thing you’re doing is impactful, that extra productivity could really help. But if what you’re doing faster or more efficiently isn’t in service of your overall goal, you’re just getting nowhere quicker. That’s because productivity as a metric is completely divorced from an actual objective. It’s at minimum one layer abstracted from your actual goal — say, helping more customers or increasing revenue or getting that boulder to the top of that freaking hill! When teams or companies make productivity an objective, there’s no guarantee it will correlate to the business outcomes you actually want to achieve.

Business is a team sport, but productivity is about what you do with your own time. I Googled “productivity hacks” (the first page of results is ALL listicles — I quit reading halfway through “15 Best Productivity Hacks for Procrastinators”) and nearly all of the results are things you do on your own: Cut out distractions. Only check emails during certain times. Take breaks. Wake up early. Look at natural light. These are all cool tips that might help, but they’re fundamentally individual — just like productivity. You’re not going to accomplish company goals on your own. Because of that, setting productivity goals is tantamount to setting individual goals — everything you really want to accomplish is as part of a team.

We’re going to get mathematical here for a second, but also hypothetical, so both type A and type B personalities will be frustrated. But because productivity is so individualistic, the output of productivity is also limited. In mathematical terms, it’s additive, or linear. It looks like this as a graph: 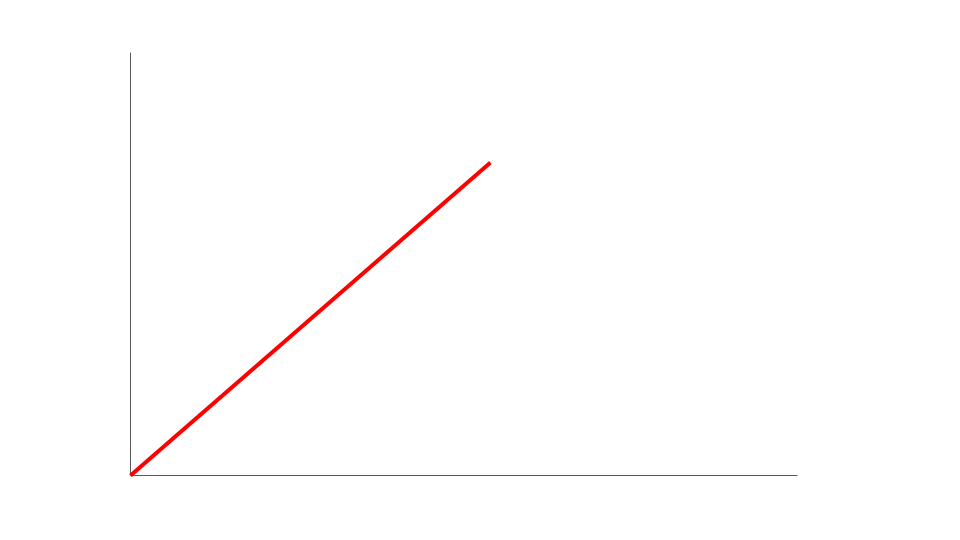 In hypothetical terms, let’s say you manage to get rid of all that wasted time we talked about earlier. Congratulations, you have twice as much time. Now you can double what you would have accomplished. 2x + y. See above.

Now, this is all hypothetical mathematics (the best kind of mathematics. Fight me.), but I have yet to find a company that’s stoked about linear growth on any graph — especially when this graph comes with a rock-solid, utterly immutable upper limit like Time (you can fight me too, Albert Einstein). Nobody can work more than 168 hours in a week. But we’ll draw this line a little below that, to account for eating, sleeping, and (hypothetically) weekends. 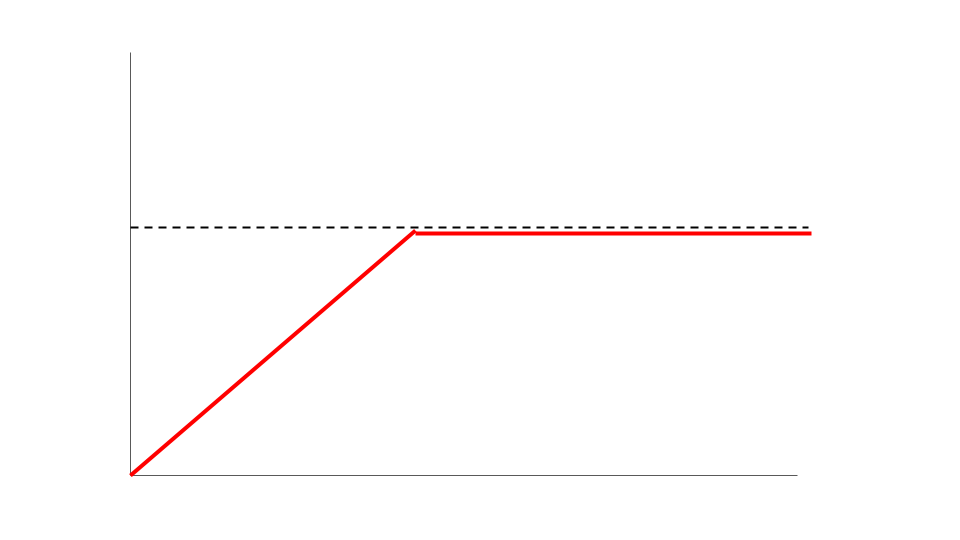 Besides, you don’t need to set productivity goals when you have the mother of all objectives: impact.

3 Reasons impact is a better objective

I just 2X’ed this listicle. It’s time to start optimizing your impact, not your productivity. Here’s why:

1. Impact is the goal

Impact is when your team and customers connect. But your team isn’t a hive mind (unless you run a team of X7 transgenics (that is a deep, deep reference)). They need to connect to each other, too. And in the age of working from home, that’s no small thing. And real talk: even when we were all at the office together, it still took intention. That said, it’s not a great leap for me to assume that most — if not all — of your current goals and objectives are either explicitly team goals and objectives or heavily reliant on the work of others around your company. We intuitively try to hack our own productivity while simultaneously, all our OKRs (objectives and key results) are team OKRs. Let’s start matching our efforts to our objectives.

Because impact is so collaborative, it’s also exponential in nature. The impact I make on the marketing team amplifies and extends the impact of the sales team. But the sales team is composed of individuals, too. So if I increase my impact, and that helps each individual Account Executive make a greater impact, I’ve multiplied my impact by AEx (uh, that’s x times the number of AEs and it’s a math thing again). And that’s starting to look much more like this kind of graph: 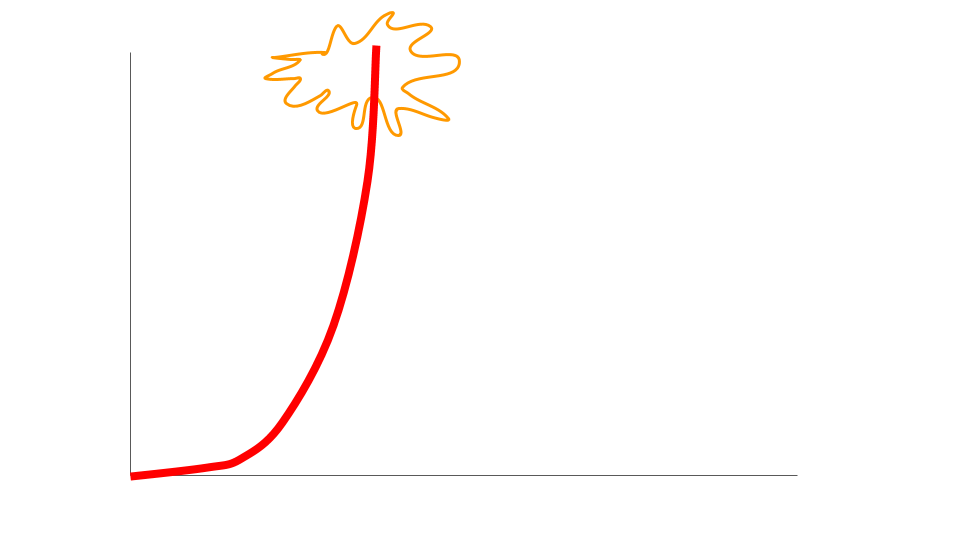 Oh yeah. Impact puts the “rhythm” in “logarithm.” (Uh… it works better if you say it out loud.)

Okay, by now you’re convinced that impact rules and productivity… well… not so much drools, but is actually just a potentially contributing factor to your overall impact.

But what actually is impact? I mean, beyond brand-speak?

Hypothetical mathematics to the rescue again. We like to think of impact as an equation:

Let’s break it down.

In the immortal words of the poet laureates of my generation, “Late night, come home / Work sucks, I know.” But Blink 182’s job was to be in a pop punk band and make music videos of questionable taste. Their work didn’t suck, because it didn’t take effort. (Okay, that’s a savage swing at Tom, Mark, and Travis. I’m not a pop punk fan.) But you get my point. A lot of people love their jobs and relish the work — even when it’s challenging. When you’re loving your work, it just feels effortless. The busy-work you struggle against seems to melt away. The key to increase this part of the equation isn’t about increasing the amount of work you do, it’s about eliminating the effort it takes.

And “Effort” is a quantifiable metric. More and more software companies are starting to track and benchmark “Customer Effort Scores” by asking:

And there are all kinds of ways to extract effort from your day-to-day. As you work, make a note of all the things that block or frustrate you. All the things that take extra time. All the parts of your job that annoy you. Then figure out how to do less of those things. Chances are your list looks a lot like mine:

I need to do less of all that stuff. Personally speaking, the more I rely on Front, the less of those little efforts I have to make. Just sayin’.

Remember those beautiful, curvy, logarithmic graphs we talked about? Most companies are obsessed with them. So obsessed, they’ll do almost anything to “bend the curve” — to accelerate growth. Because to most companies (or should I say to most boards), linear growth is not fast enough. So that leaves us chasing scale, sizing up our cargo trying to figure out which to throw overboard.

“Here’s our customer experience. We can handle a 10% drop in CSAT, can’t we?”

“Here’s our CSM team. They could take on 50 more accounts each, couldn’t they?”

“Here’s our least lucrative segment. They can self-serve — or churn, maybe?"

It’s about defiantly staring down that decision and saying, “We’re going to get there together or not at all.” And it’s technology that allows you to say that without being naive. At least that’s the promise of Front: More human connection with less effort and sacrifice.

In other words, more impact.

Collaboration can be transformative. When your team works together, “I did it,” becomes “We did it!”

Remote work means trying twice as hard to get the team to interact. But cheesy icebreakers on Zoom aren't the only option.