How to build a high-performing team

An exploration into the habits of high-performing teams to understand their communication patterns, working styles, and the interpersonal behaviors that set them apart from the rest.

An exploration into the habits of high-performing teams to understand their communication patterns, working styles, and the interpersonal behaviors that set them apart from the rest.

Behind every successful business is a team that cares.

There’s nothing more inspiring than seeing a hard-working team accomplish something great.

Think about those “rocket ships”—those household name brands with teams that feel unstoppable. What are these high-performing teams doing differently from their competition? How are communication patterns, meeting habits, and interpersonal relationships fueling heightened levels of creativity, productivity, and ultimately, business success?

To collect these findings, Front partnered with Dr. Ron Friedman, a social psychologist specializing in human motivation, and author of The Best Place to Work and Decoding Greatness. Dr. Friedman is the founder of ignite80, a learning and development company that translates research in neuroscience, human physiology, and behavioral economics into practical strategies that help working professionals become healthier, happier and more productive. Ron said:

“We’ve long known that workplace friendships yield more productive employees, and not just because friends are easier to work with. It’s because there’s more on the line. When colleagues are close, a poor effort means more than a dissatisfied customer or an unhappy manager. It means letting down your friends.

What this new research suggests is that high-performing teams don’t just have close friendships—they have authentic relationships. They share positive and negative emotions; they’re collaborative but also competitive; they work hard yet they make time to gossip, bond over non-work matters, and even discuss books.

This quantitative research study was conducted by ignite80 on behalf of Front to explore the behaviors and attitudes of office workers who are members of high-performing teams.

A total of 1,106 U.S office workers who operate in teams of three or more were interviewed between June 23 and July 7, 2021. The sample spanned an age range of 18 to 55+, over 15 industries, all company sizes, and all levels of seniority. Respondents completed 48 multiple choice questions on a variety of workplace topics.

How often your team communicates and over what channels aren’t the only factors to consider. Members of high-performing teams don’t shy away from honest dialogue, sharing both positive emotions, like wins and jokes, and negative comments, like critiques and complaints.

The best teams value each other—in the office and beyond… 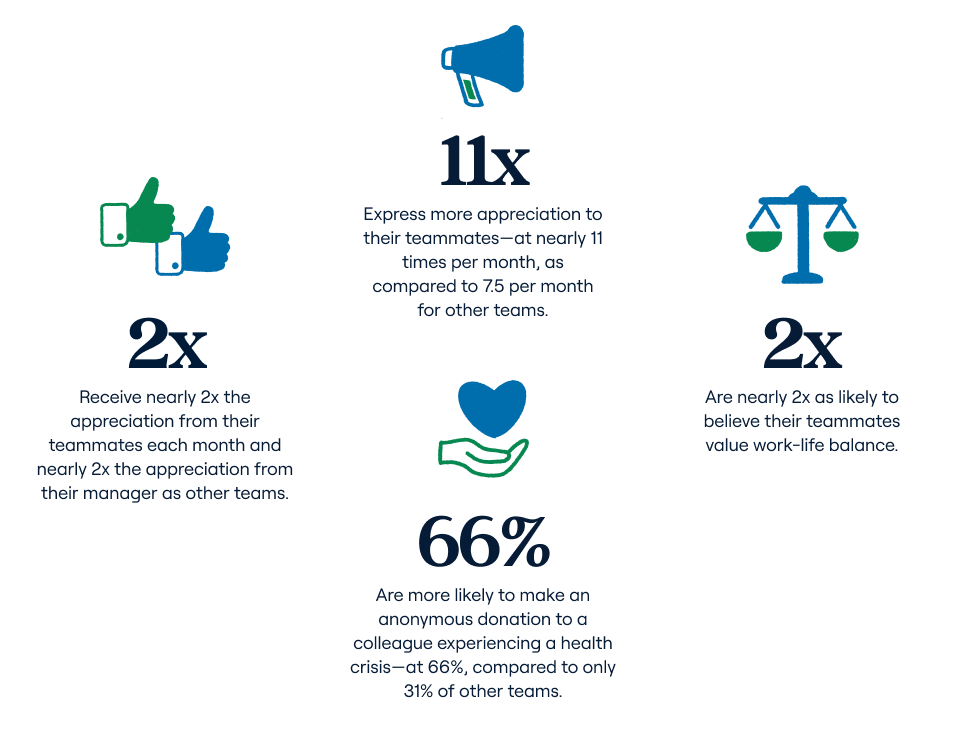 Members of high-performing teams also pull their weight and feel that their team does, too:

Meet with a purpose—and care.

…but they make time to catch up.

Build an environment where everyone can make an impact at work.

…and believe their work matters.

Members of high-performing teams feel that they’re making an impact with their work:

The best teams bring care to the workplace.

People make a difference. No matter if you’re virtual or in the office, centered in one place or across the globe, members of high-performing teams care deeply about the quality of work they’re doing each day and the impact it has on the world around them. Pair that with a team that’s highly invested in each other—and you’ll be unstoppable.

Humans are, by nature, social creatures—but that doesn't always mean that being social is enjoyable. Here are the 4 kinds of communicators and how to speak with them effectively.

Remote work means trying twice as hard to get the team to interact. But cheesy icebreakers on Zoom aren't the only option.